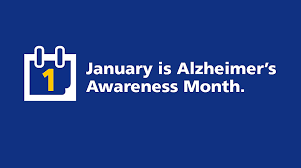 January is Alzheimer’s Awareness Month, an opportunity to better understand the realities of those living with Alzheimer’s and other forms of dementia, as well as their caregivers. Today over 500,000 Canadians are living with some form of dementia, including Alzheimer’s disease, a number that is expected to continue to rise as the population ages.  While early diagnosis and prevention are key factors in dementia care, knowing some of the signs such as memory loss, challenges with familiar tasks, communication problems and mixing up dates and places may be things to watch for.

Each January, the Alzheimer Society of Canada supports and leads Canada’s Alzheimer’s Awareness Month.  During this month, the Society encourages individuals to learn more about dementia and its stark impact on Canadians.  And while Alzheimer’s Awareness Month may stop at the end of January, the experiences of people who live with dementia do not. As such, the Society is asking Canadians to take what they’ve learned during the month and continue to share it throughout the year.  To find out more about Alzheimer’s visit https://alzheimer.ca/en.

The Champlain Library will soon have Memory Activity Kits available to help support family members and caregivers of people living with or at risk for, varying stages of cognitive impairment.  The kits will include selected tools such as prepared activities, games and workbooks that encourage social engagement and support skills and abilities. Stay tuned to the library’s announcement of the availability of these kits through our website or social media platforms.